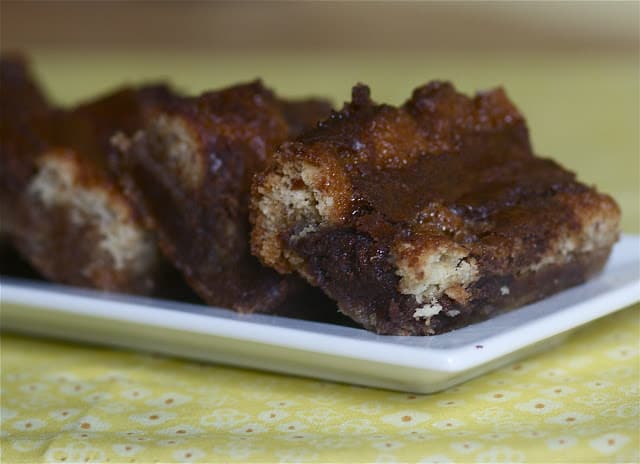 I went to college in a super small town called Stevens Point, WI. On any given day the most exciting things to do included trips to Perkins Family Restaurant, hikes through the campus nature reserve, and during the warmer months, visits to a place called Belts. I was a brand new freshman when I was first introduced to it and it was my absolute favorite place to go to all four years. What was Belts you may ask? Well I’ll tell ya- it was probably the best little Ice Cream stand I’ve ever been to. Freshly churned soft-serve meets made-from scratch baked good mix-ins. It was sweet tooth heaven. Especially when I discovered my favorite thing ever. It was called the “Banana Foster Brownie Concrete” and it consisted of Vanilla soft serve, swirled with caramel sauce. chunks of fresh banana and gooey brownie bits. So freakin’ good.

Ever since then, I’ve been obsessed with mixing those three things. I made a version of this brownie a long time ago, and though it was great, I felt like it could still be better. I knew I needed a thicker caramel sauce and a fudgier brownie. Topped with a scoop of Vanilla Ice Cream it may or may not fill the void I’ve been missing since college. (I had every intention of making sundaes out of these brownies but my sisters and friends ate them too quickly.) 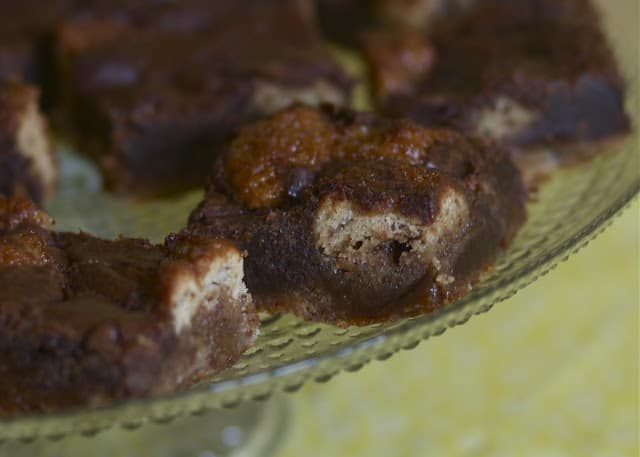 It’s interesting how these brownies come together. Both times I layered the pan like so: Banana Cake Batter, Caramel layer, Brownie Batter. Both times the caramel soaked into the cake and made it taste better. In this case- the banana layer bubbled up and around the other layers, making it all swirled and pretty. The caramel made the brownie part almost fudge like. I always think I’ll get three distinct layers, but I think that’s still a work in progress. Needless to say- they were by far the best brownies I’ve made. Every piece was different as the three layers were swirled throughout and you never really knew what you were going to get in each bite. As my friend Sam said while eating his third, “You know Audra, I’m super happy for you, but anyone can get engaged….I think this brownie is the real reason to congratulate you.” :) Yeah they’re real good.

PS- I’m going to try on a wedding dress today. Because you know what? I never have before. And now I can. I can also read Wedding magazines without feeling weird that I wasn’t wearing a ring. (but I totally used to read them anyway!)

These individual recipes only called for 25/30 minutes in the oven. For some reason though, mine needed a bit more. (Maybe because of the caramel.) I would start low and add more time if needed. If you don't want to make homemade caramel, just use store bought ones melted on the stovetop with 1/3 cup heavy cream.